As you probably have noticed, a lot of new startups focused on scientists have emerged in the past few years. Last Tuesday, Victor Henning from Mendeley invited 15 of these startups, including Shazino, at LeWeb in Paris for an event called “Axon@LeWeb”.

LeWeb is one of the top European technology conferences, where people come to discuss about what’s new in technology, and discover some of the most innovating startups.

Axon and “The Future of Science” 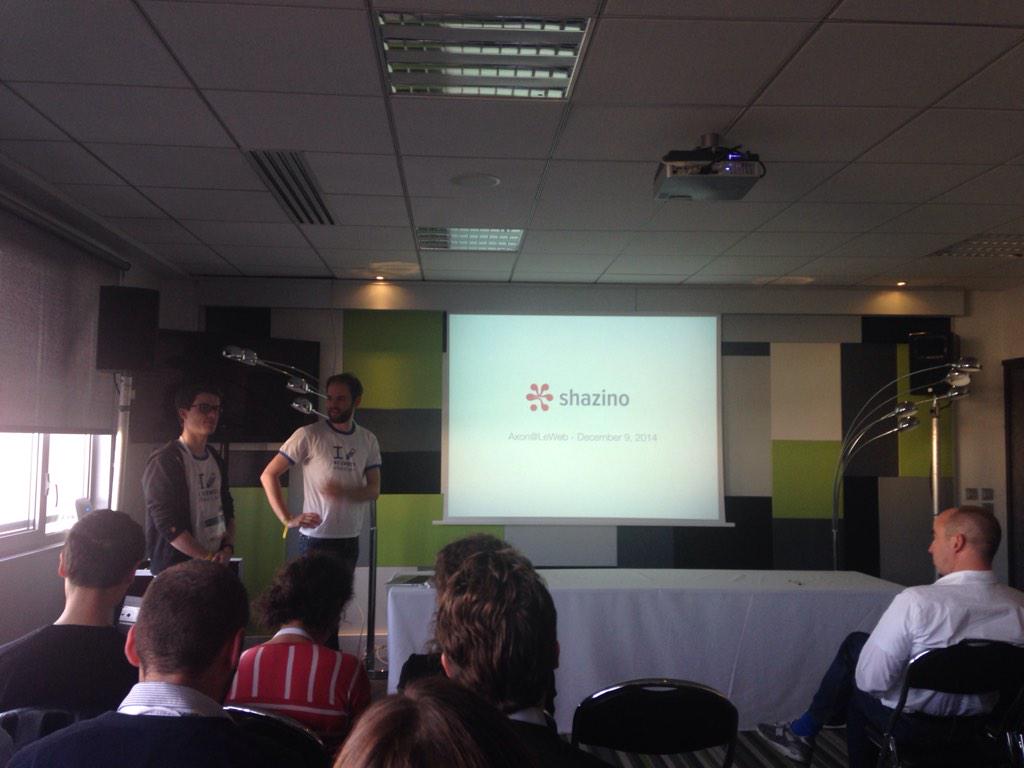 In 2009, Victor Henning came to LeWeb to present Mendeley, and ended up winning the startup competition. Five years later, Mendeley is a tremendous success, and he is back in Paris for “Axon@LeWeb” :

(…) we are bringing together 15 of the world’s most exciting science & research startups in a session entitled Axon@LeWeb. These startups are building tools that change how we do research, that help the best minds of our generations work more efficiently, that accelerate the progress of knowledge.

We are extremely happy to be part of this selection, amongst other inspiring startups. It is quite amazing to see the enthusiasm coming from these young companies focused of science and research. Even more stimulating is the realization that these services can often complement each others, creating this amazing network of innovative tools, websites, and apps.

We could say that Mendeley, with other scientific social networks such as ResearchGate or Academia, represent a first generation of successful startups, now accomplished companies, which have changed the way people do research. What we have seen at Axon very much looks like a second wave of even more startups, bringing new innovative services for scientists.

There is still a lot to figure out for us and our fellow entrepreneurs. Discoverability and sustainability are still challenging for young companies, and given that this evolution towards digital sciences is still only beginning, we are convinced that working together can both help us and bring progress to the whole scientific community.

For 3 days, LeWeb is also a good opportunity to get an overview of new trends and innovations in the tech business.

One of the main topic for the conference was the reinvention of Healthcare. These new services and devices are radically changing the way we approach our health. Microbiomes, for instance, was here to explain how it can provide affordable analysis of the human body’s microbes, and what we can learn from them. There was also Halo Neuroscience, explaining how their technology can improve our cognitive capabilities.

Another recurring topic was the challenge of existing regulations for innovative services like Uber. The scientific community also has regulatory organisms managing research and publications, for instance in the context of public funding. Innovation, at its core, is always about out-pacing existing industries, but startups still need to be responsible for their impact on our daily lives.

Undoubtably one of the highlights of the conference, Tim Berners-Lee delighted us with his passion for an open internet, while reminding us about the importance of our online identity. Net Neutrality should never be taken for granted, and everyone on the web should stand up, just like its creator, for the principles that make these amazing innovations possible.

Someone at the LeWeb competition said that a startup is a company that wants to change the world. It certainly sounds ambitious, and these ideals are often mixed with more materialistic considerations, in a world of ever increasing valuations. Sometimes changing the world is worth billions of dollar, and sometimes it isn’t. But that doesn’t mean that it isn’t important.

Our motivation at Shazino has always been to build the best tools and services for scientists. Axon was a great opportunity for startups to spend time together and share a common vision. We are building the future of science today, and it is truly inspiring to be part of this community.